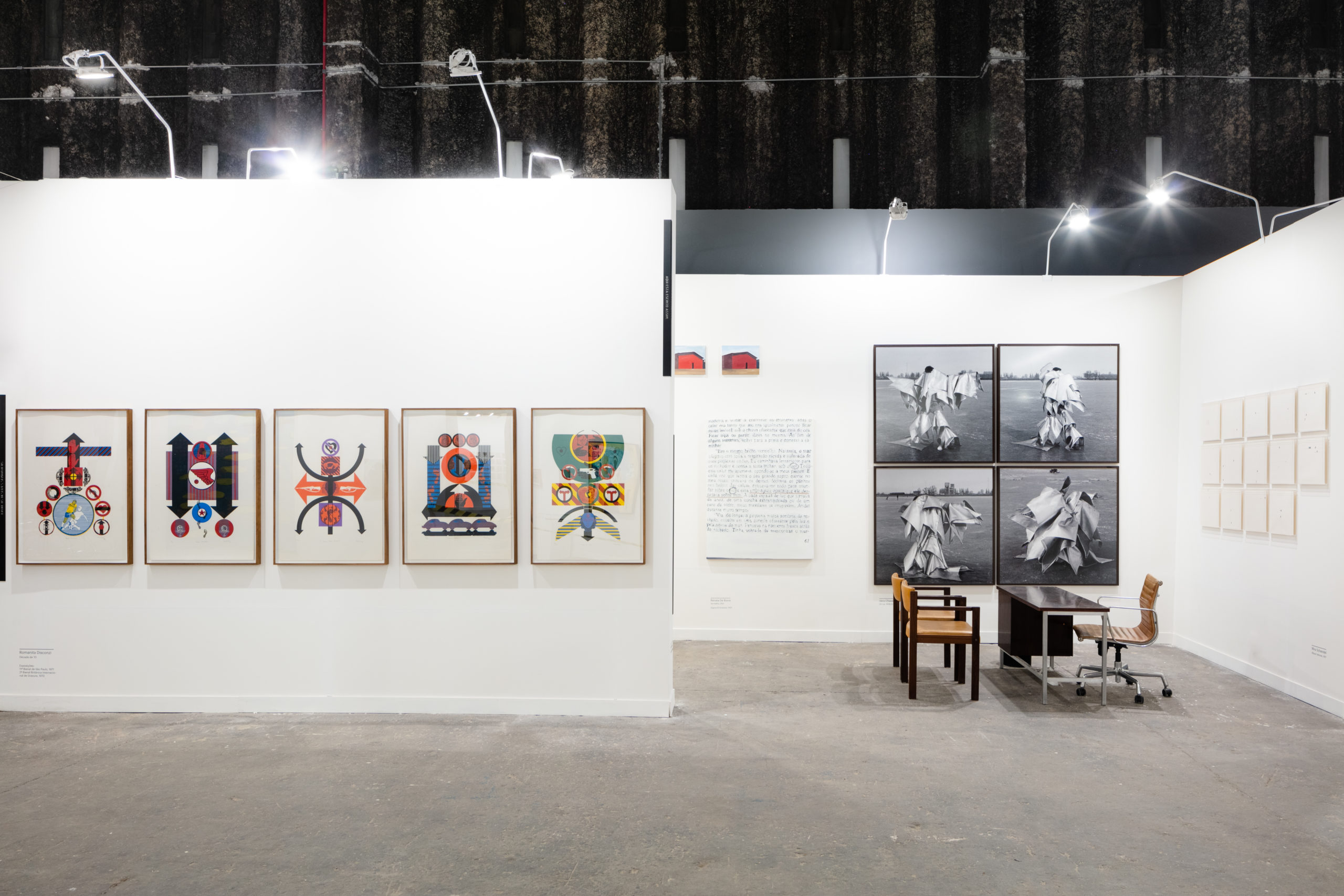 Superfície announces its participation in the 17th edition of the SP-Arte fair, which this year takes place in a hybrid model, integrating the in-person to the virtual, and presents a careful selection of works by emerging artists in dialogue with historical artists from around the 70s. Among them are four new artists represented: Renata De Bonis, Vitor Cesar, Andréa Hygino and Romanita Disconzi. Following the gallery’s proposal, which rethinks contemporary art from a conceptual perspective, works by Vera Chaves Barcellos, Neide Sá, Mira Schendel, Leonilson, Lotus Lobo, Pedro Escosteguy, Arthur Chaves and Guga Szabzon make up our space at the fair, encompassing productions from the 60s to today. 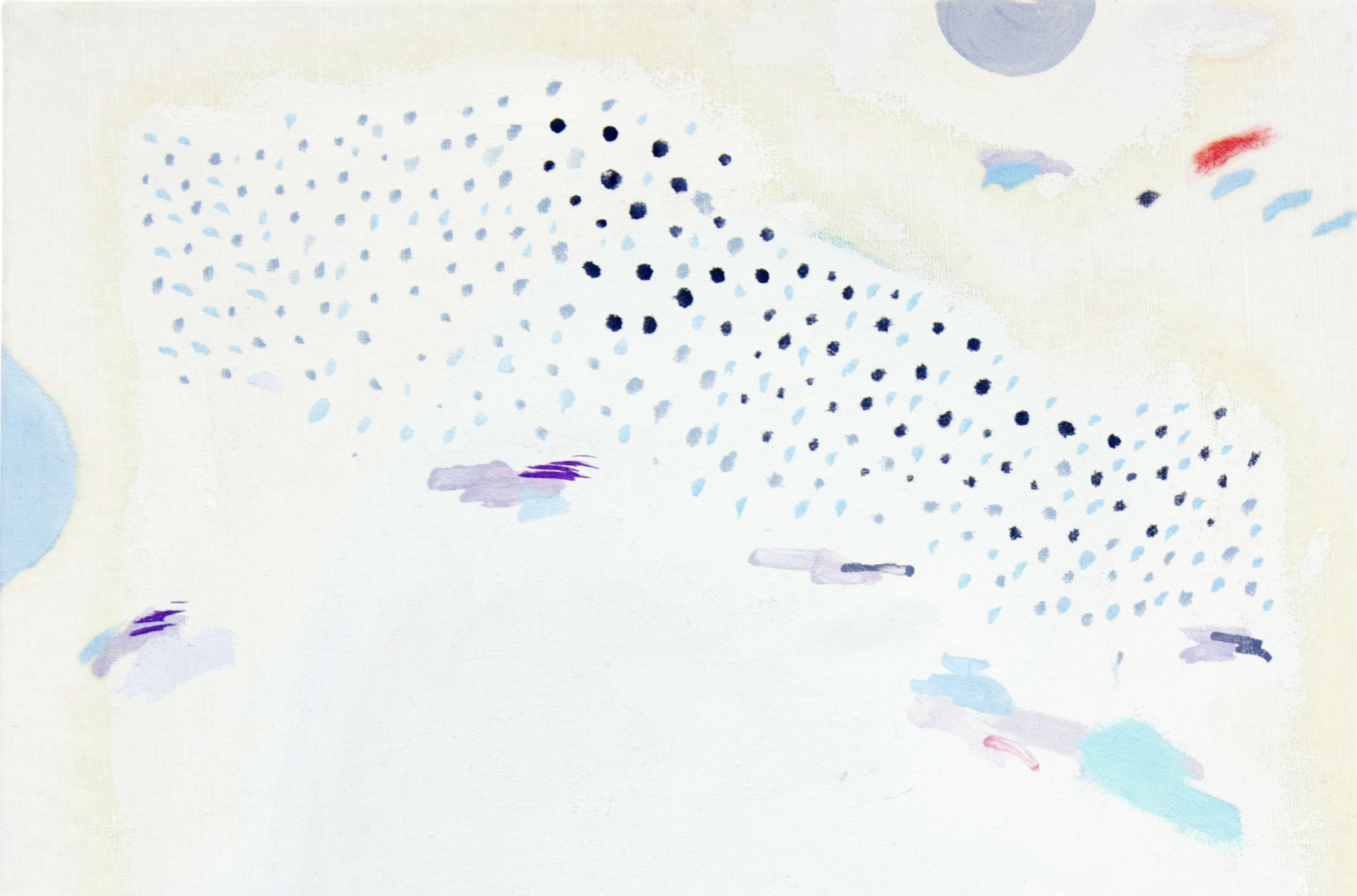 In addition to the participation in the 17th edition of the SP-Arte fair, Galeria Superfície presents a solo project by artist Yasmin Guimarães in the Viewing Room.

The canvases painted by Yasmin Guimarães bring back the calm that has been lacking in recent times. In a kind of escapism, the artist paints imaginary landscapes from dots, short, empty brushstrokes, caked with color and subtle chromatic stains. The canvas, almost always raw and apparent, dialogues in a simple and courageous way with the history of art. Yasmin’s process starts with the gestures of painting, the staggering of spaces and the nullification of perspective. Her works stick to the plane, exploring the possibilities of expanding the limits of thinking and painting. The artist’s pictorial inscriptions arise from the intensity and breadth of her gestures, on canvases of large or small format. While the smaller ones concentrate the intention of the artist’s gesture on the surface, the larger ones make the gestures potentiate through the scale. There is in Yasmin’s work a silent scream that is at the same time appeasing. The potency of her paintings resides in their simplicity and in their ability to allow the spectator to daydream. 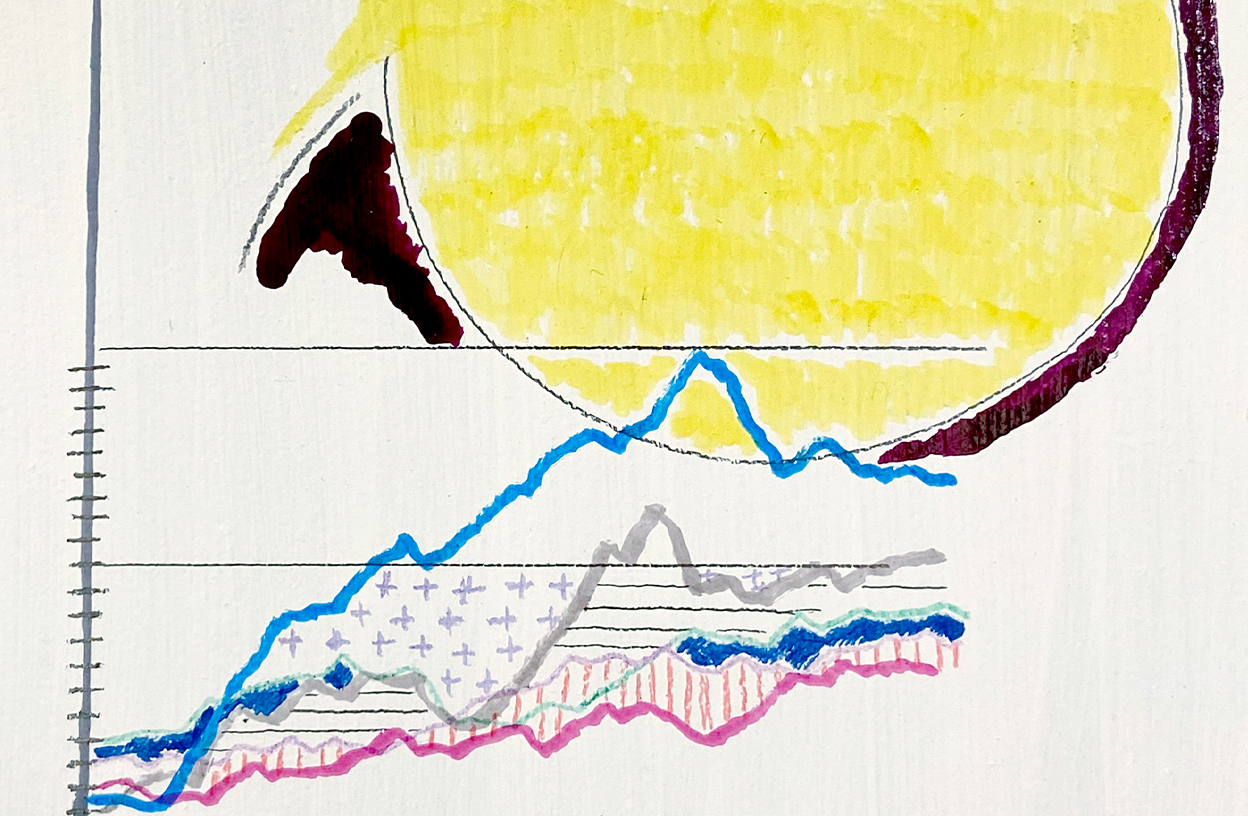 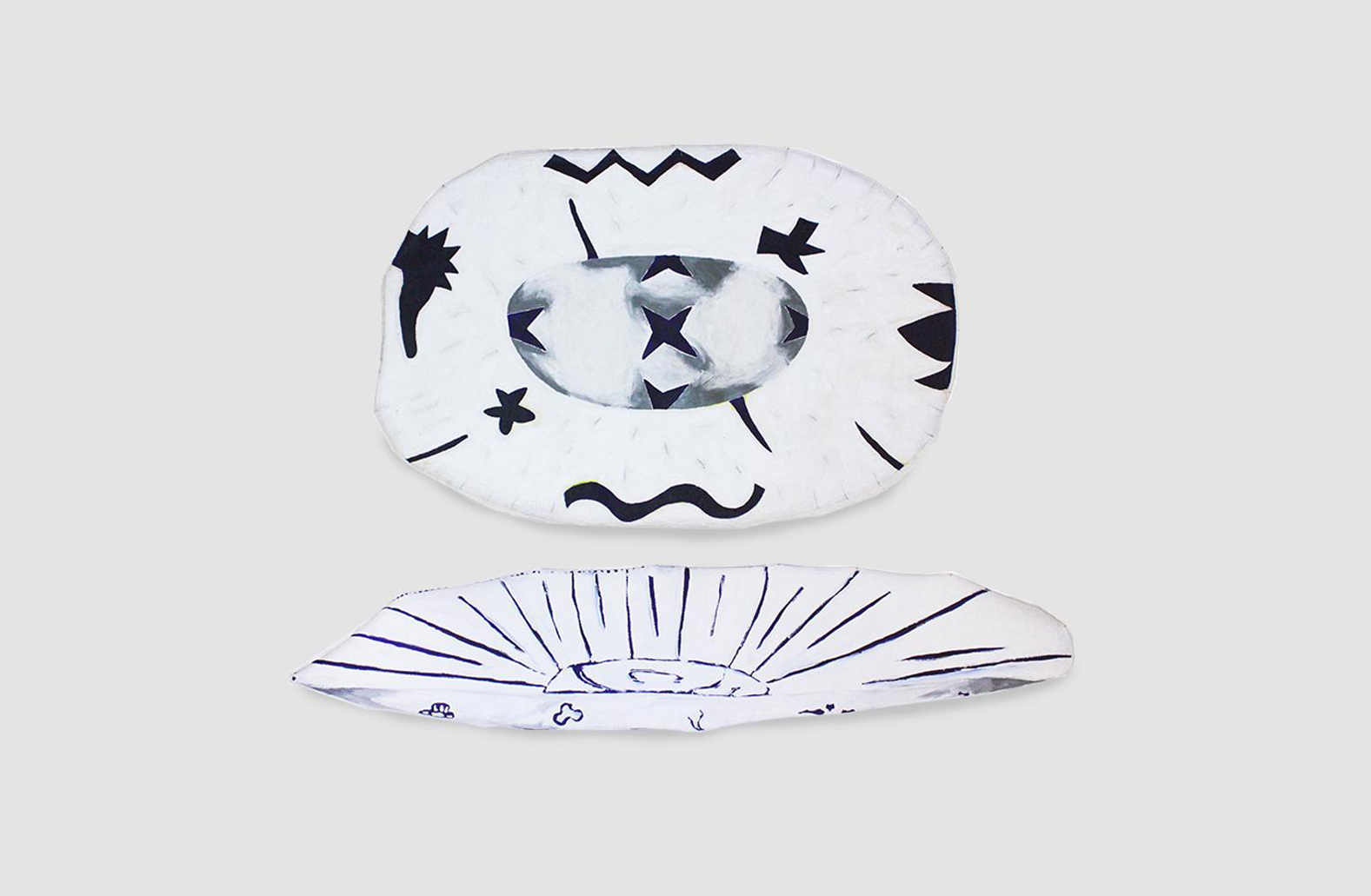 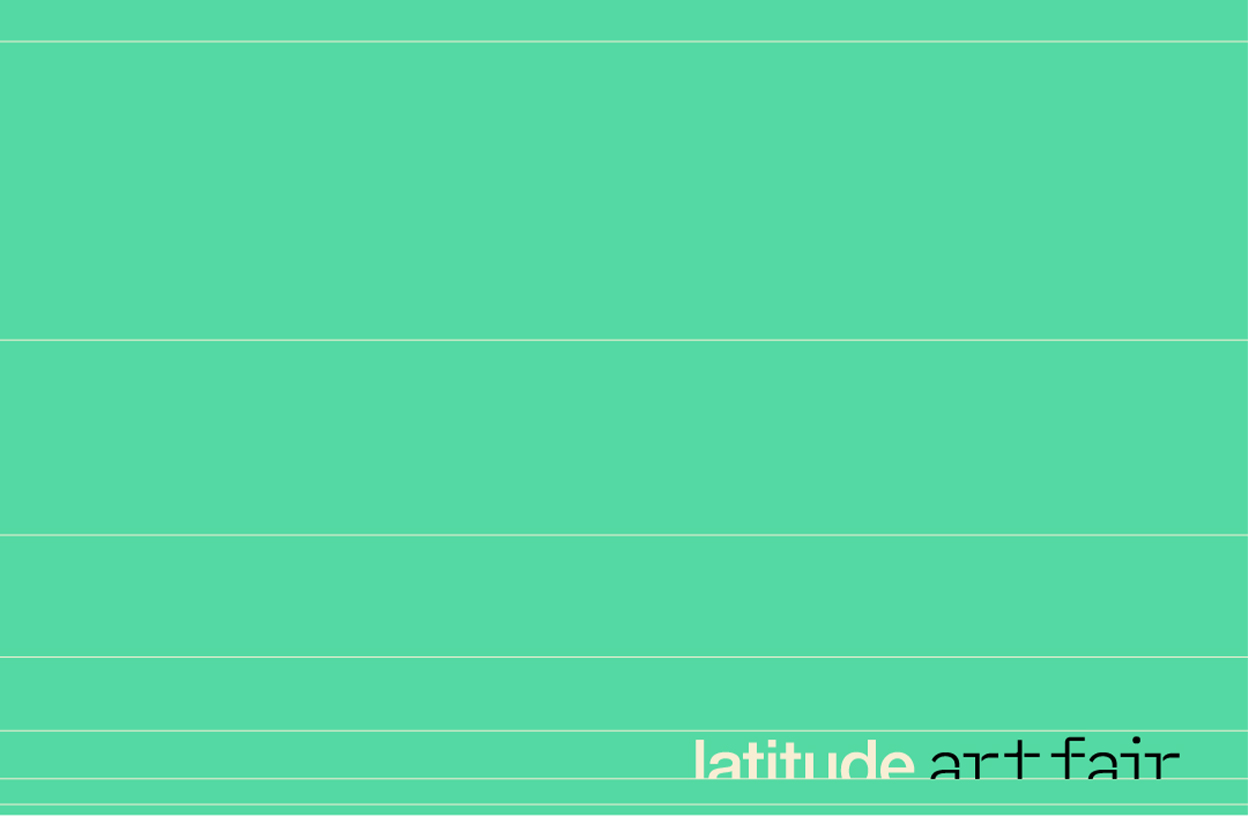 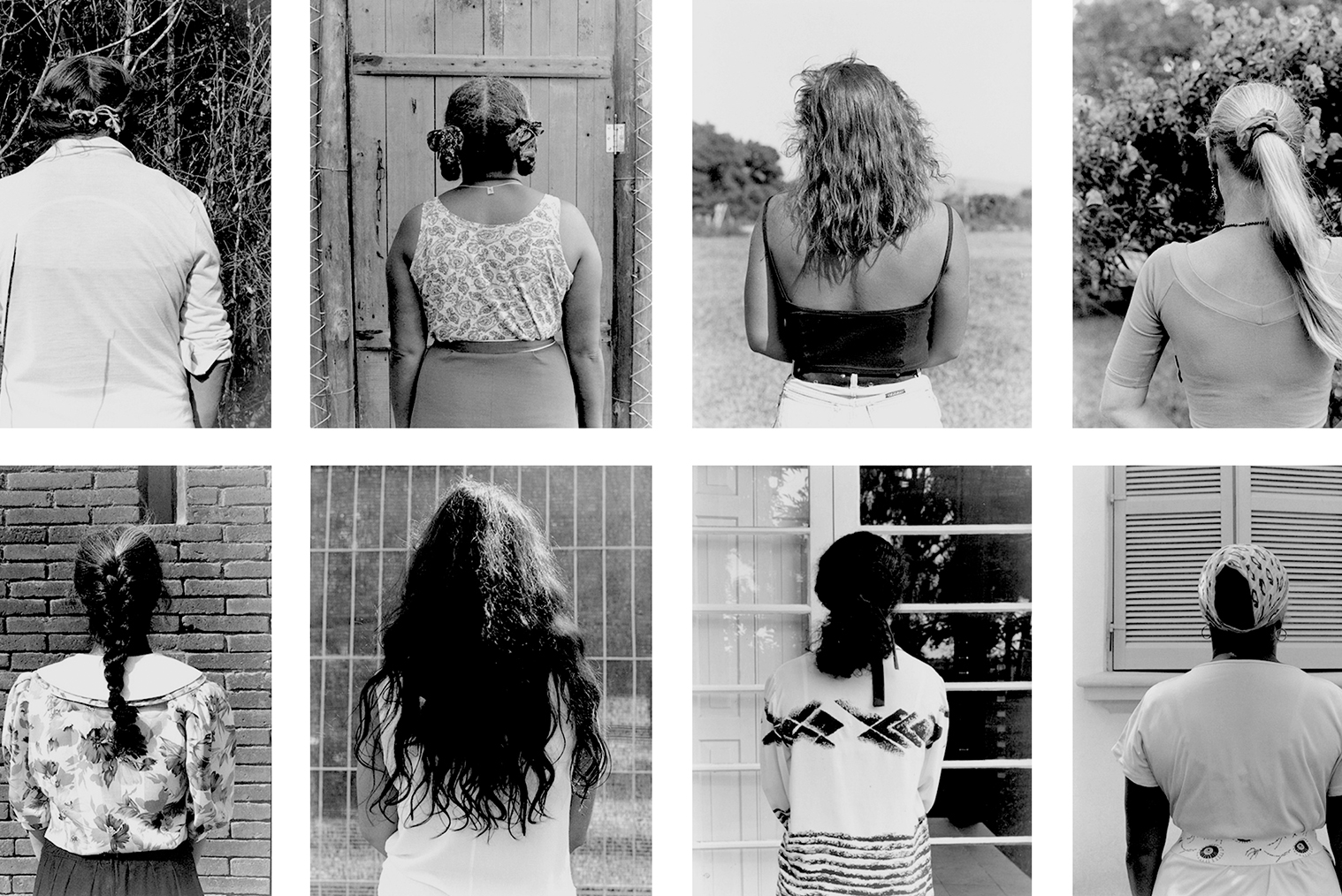 For SP–Arte’s 2020 Viewing Room, Galeria Superfície presents a solo project by artist Vera Chaves Barcellos, in a wide-ranging selection that includes works conceived between the period from 1974 to 1996. With more than 50 years of career and a foundation in Porto Alegre named after her, Vera Chaves Barcellos is part of the generation of pioneering artists of Brazilian conceptual art from the 70s, having participated in the historical exhibitions of the famous curator and historian Walter Zanini (1925–2013) at the Museum of Contemporary Art (MAC-USP), as well as the representation of Brazil at the 1976 Venice Biennale with the work “Testarte” — which is presently available. The curatorial selection allows the viewer to verify the diversity of experimental and poetic languages that the artist developed throughout her trajectory, using the new means of each era: such as video, photography, postal-art and artist’s book. 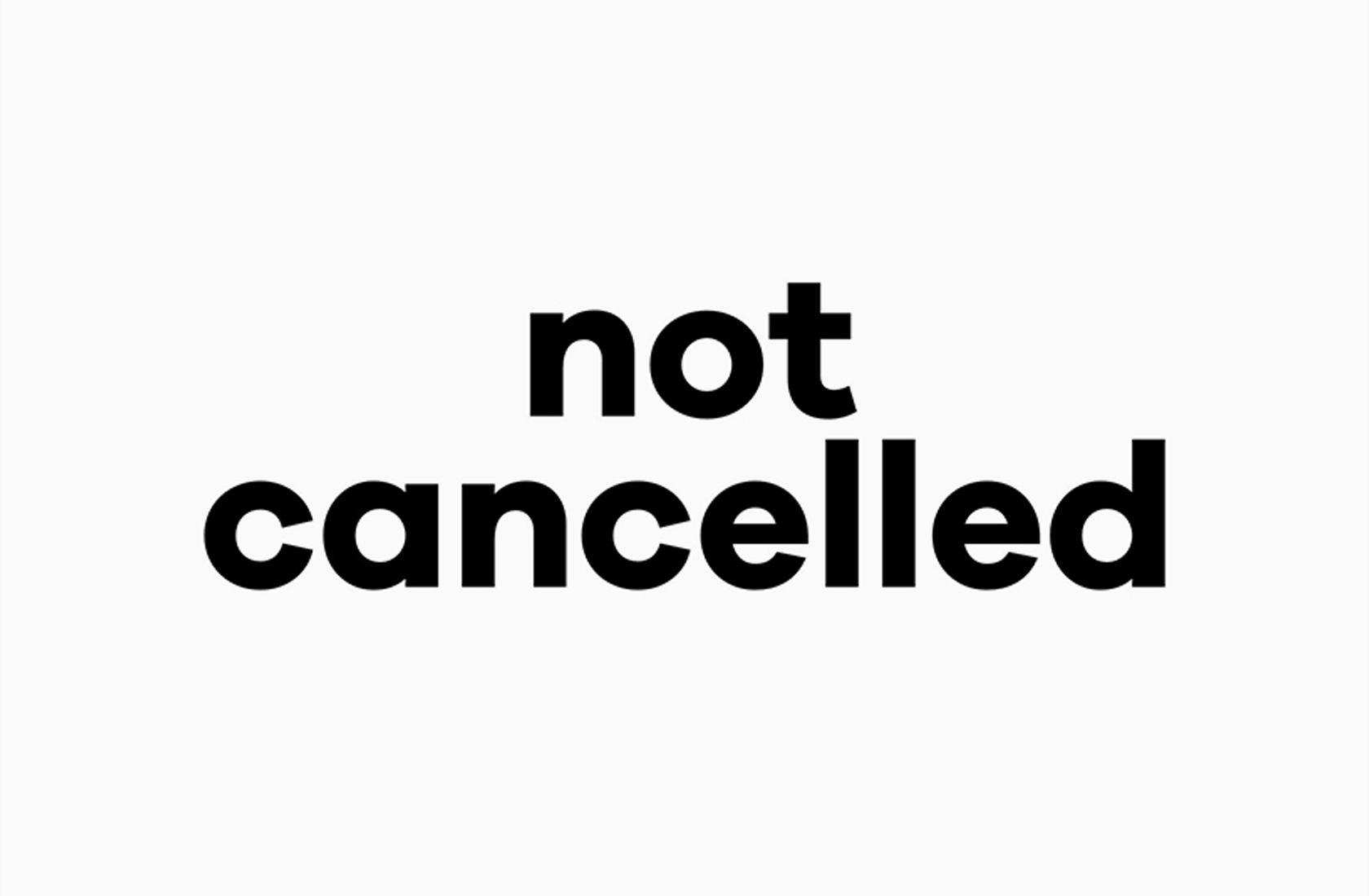 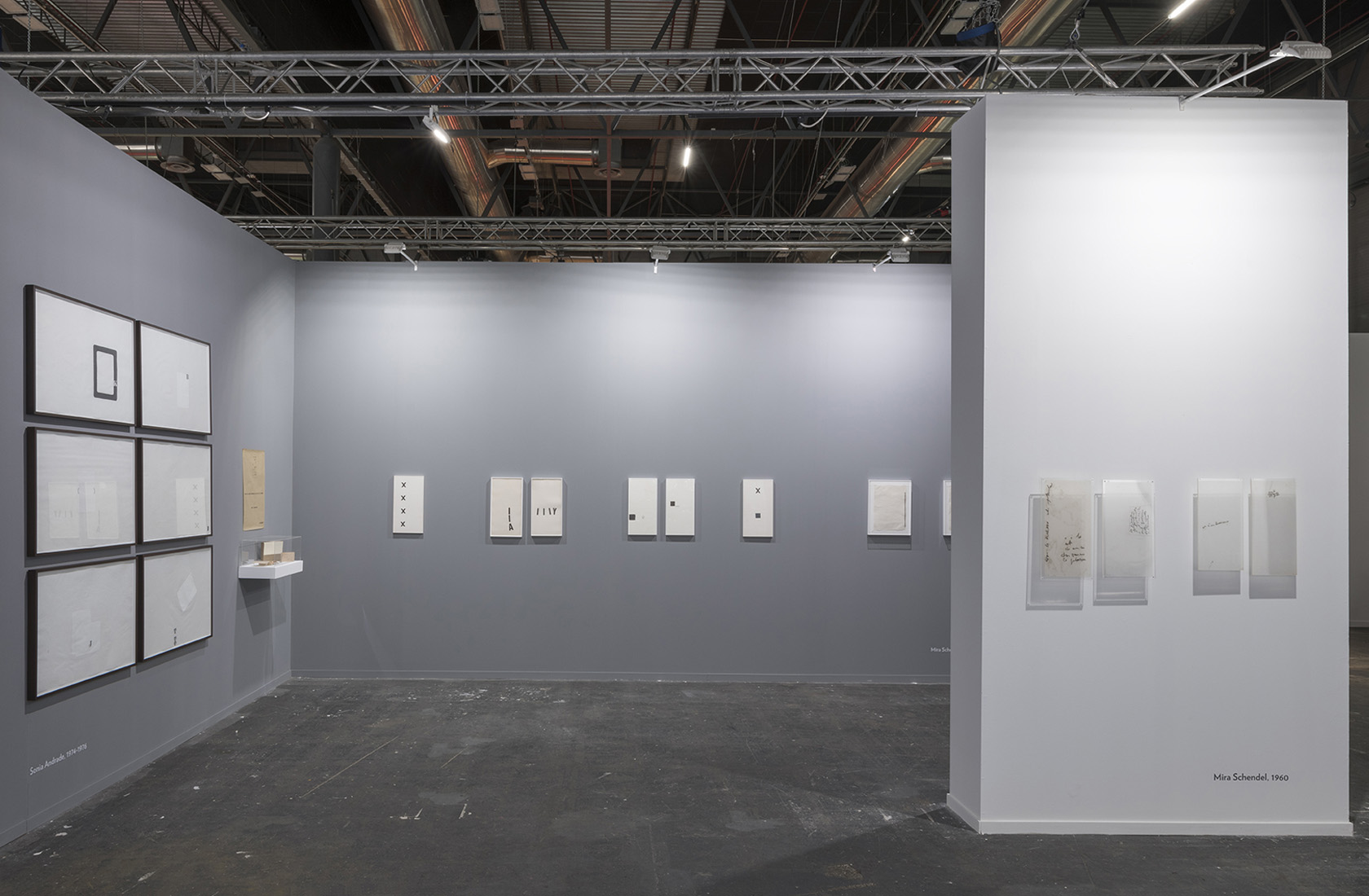 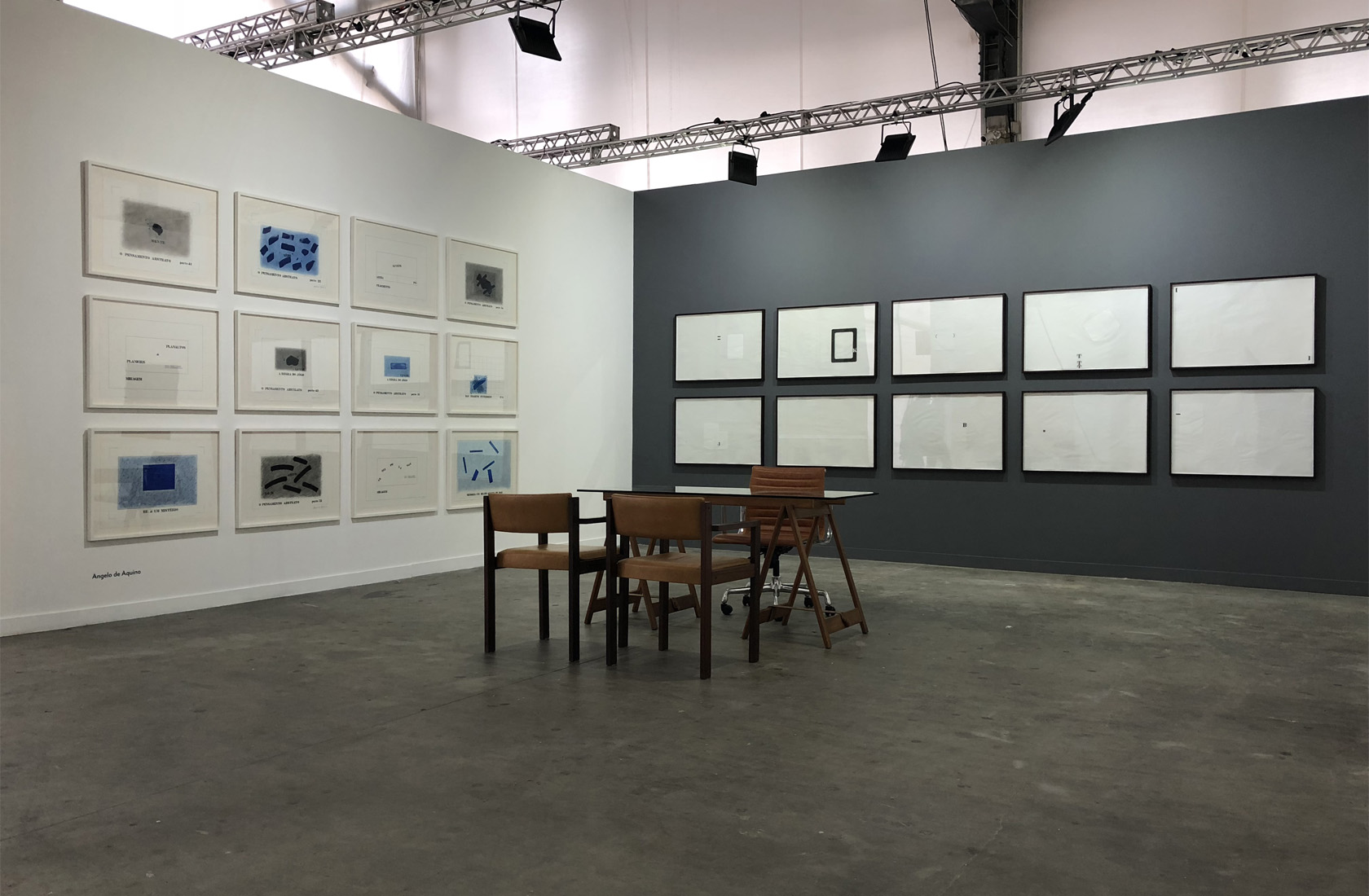 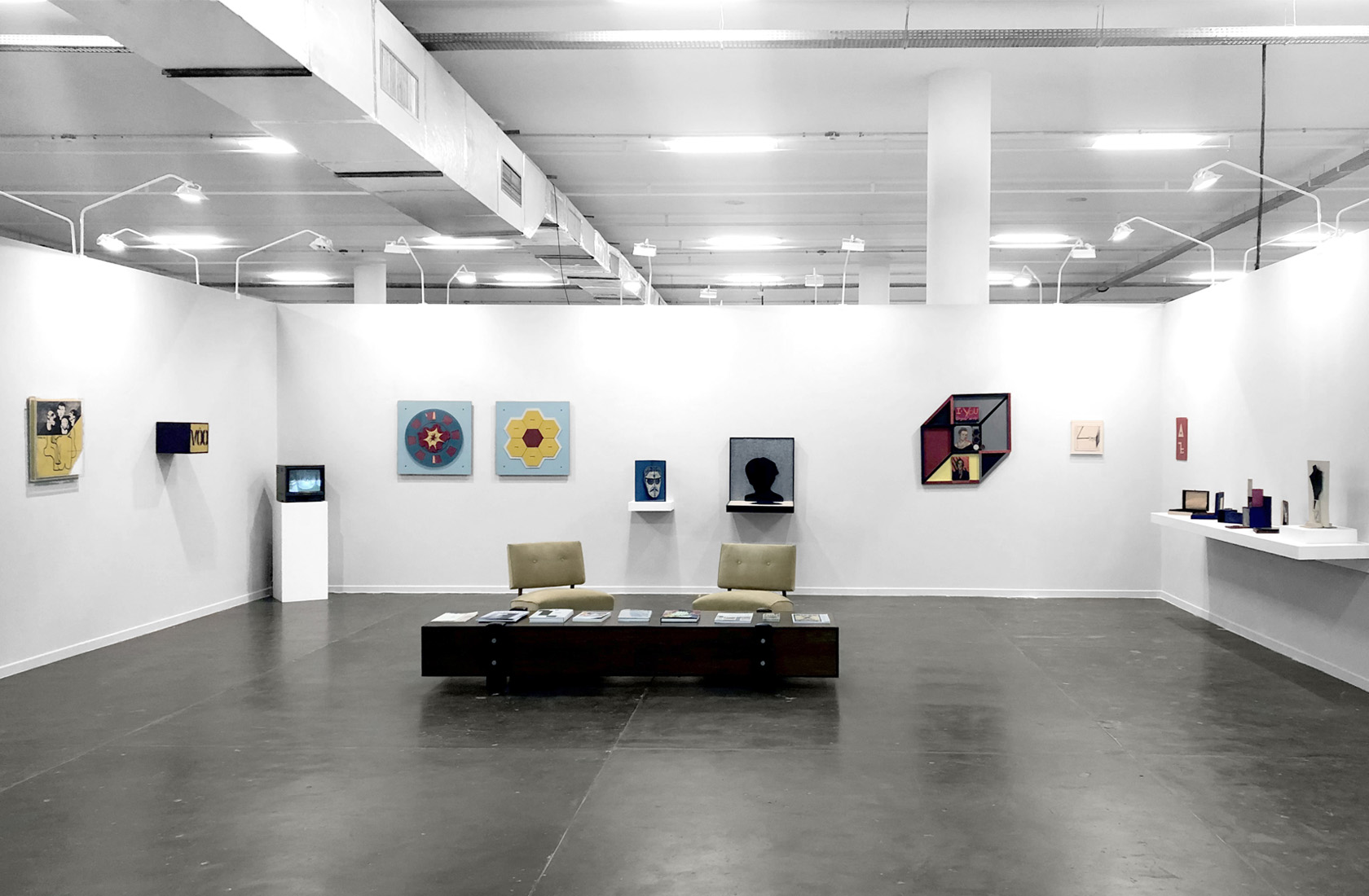 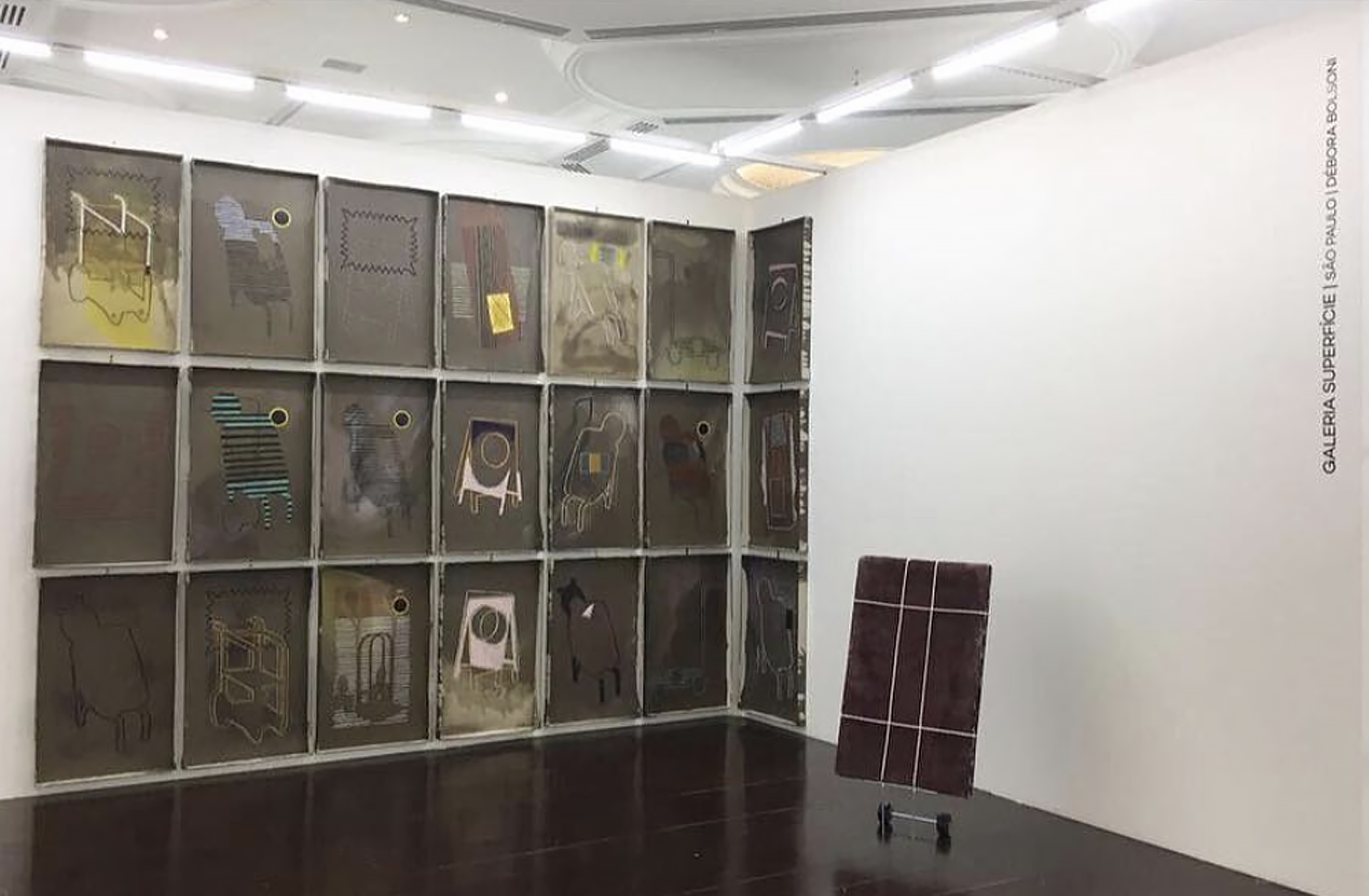 At Feira Parte 2018, the Galeria Superfície participates with the artist Débora Bolsoni in the Solo Projects section, curated by Douglas de Freitas. 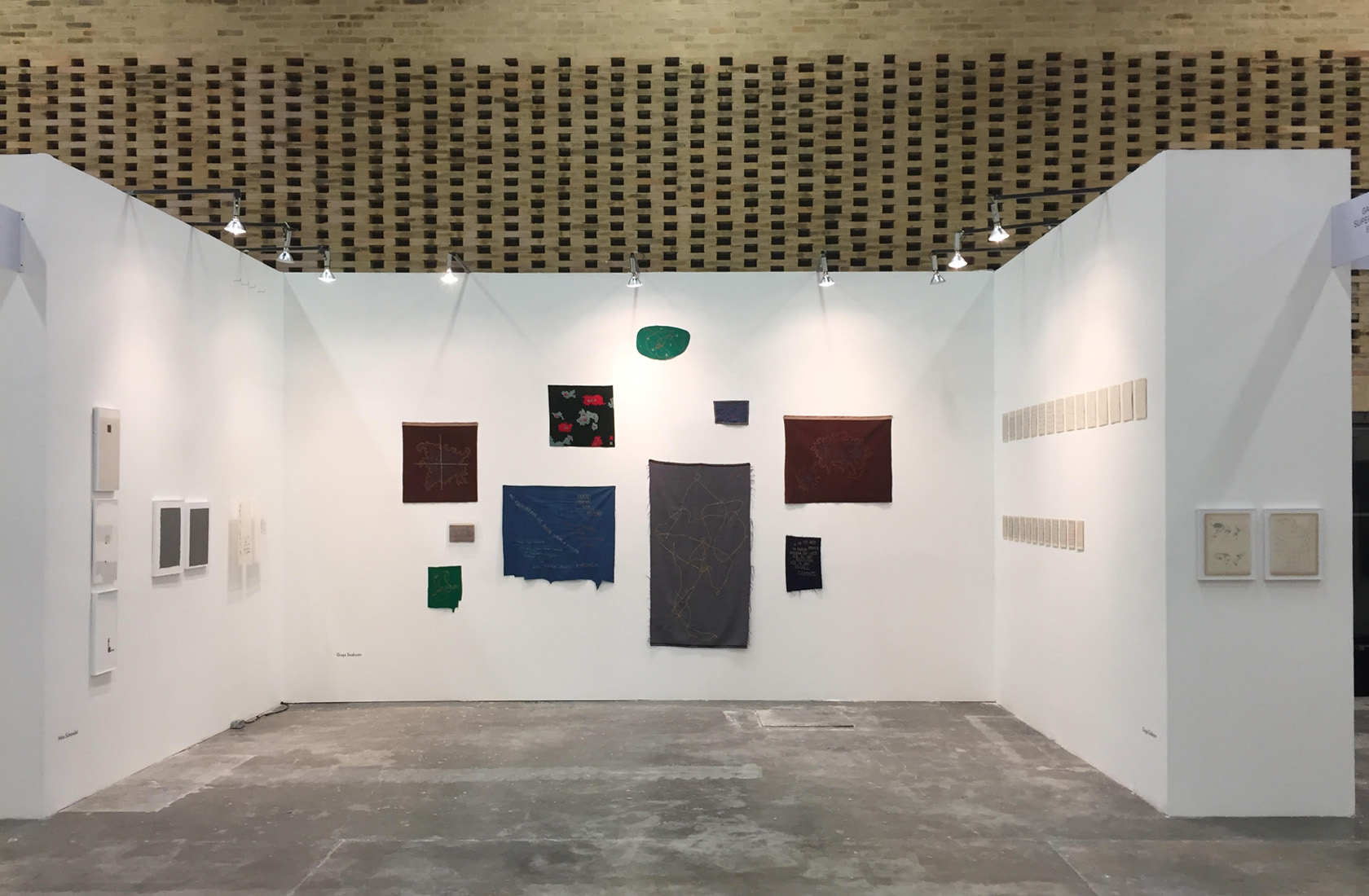 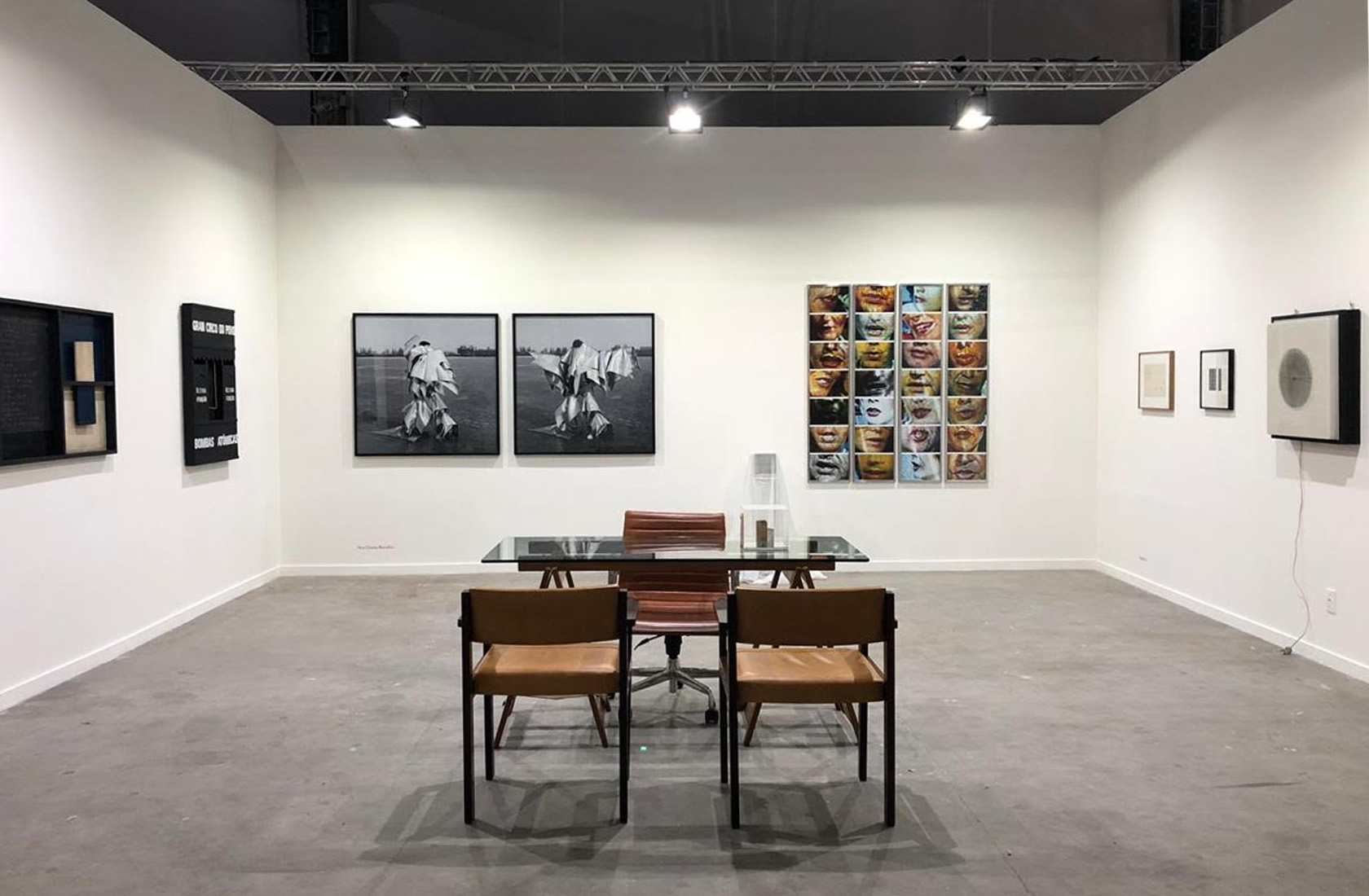 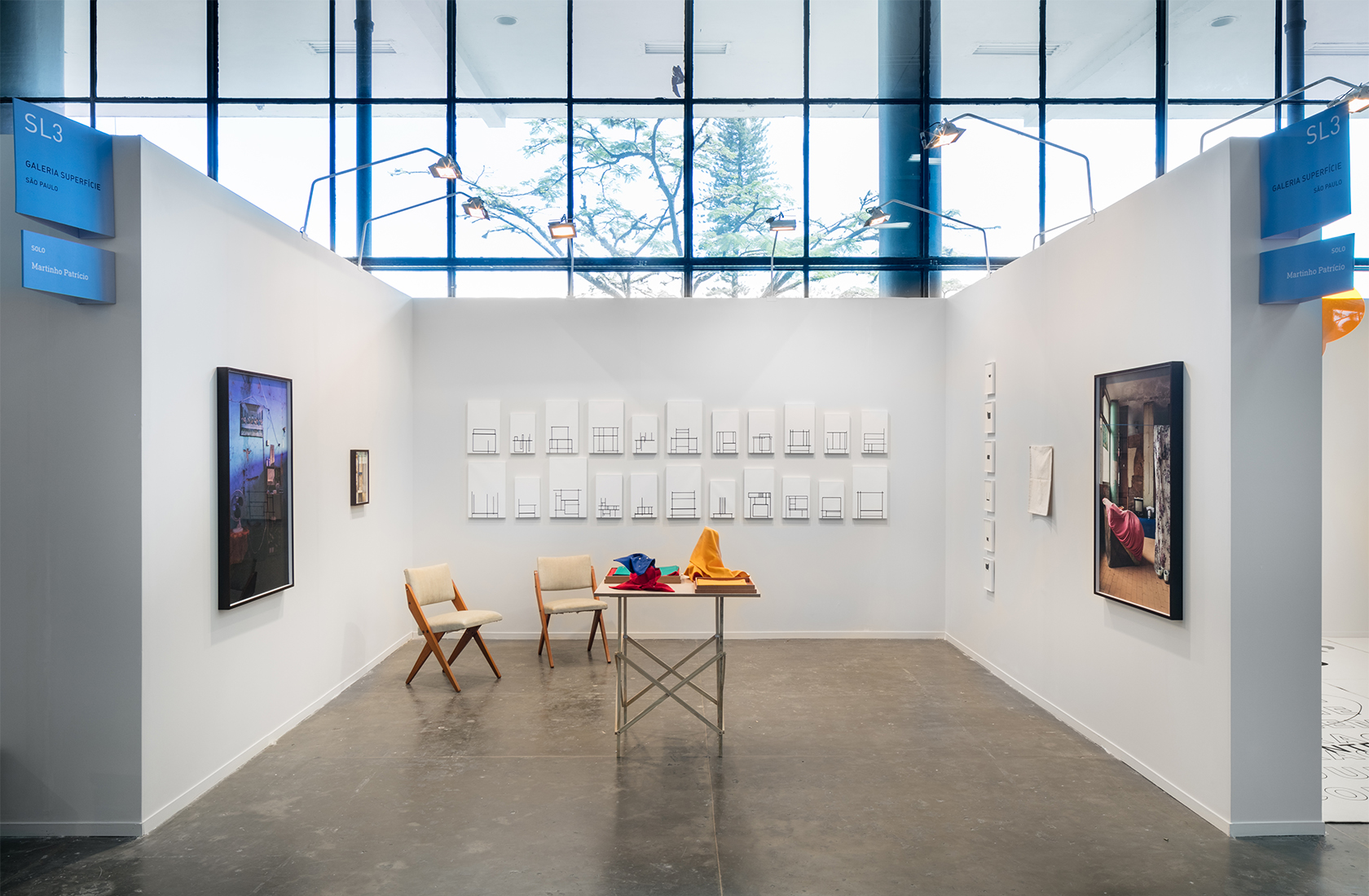 With active production since the 80’s, Martinho Patrício can be considered heir of the Tropicalist movement. Based on the work of Neoconcrete artists, he participates in the 27th São Paulo International Biennial, curated by the critic Lisette Lagnado, with the interactive installation “Brincando com Lygia”. The same reference is shown in his series “Me Molde”, in which fabric sculptures can be manipulated and even dressed. For this solo project, we present works from various periods of the artist’s production, making it possible to read its trajectory and the connections in it. 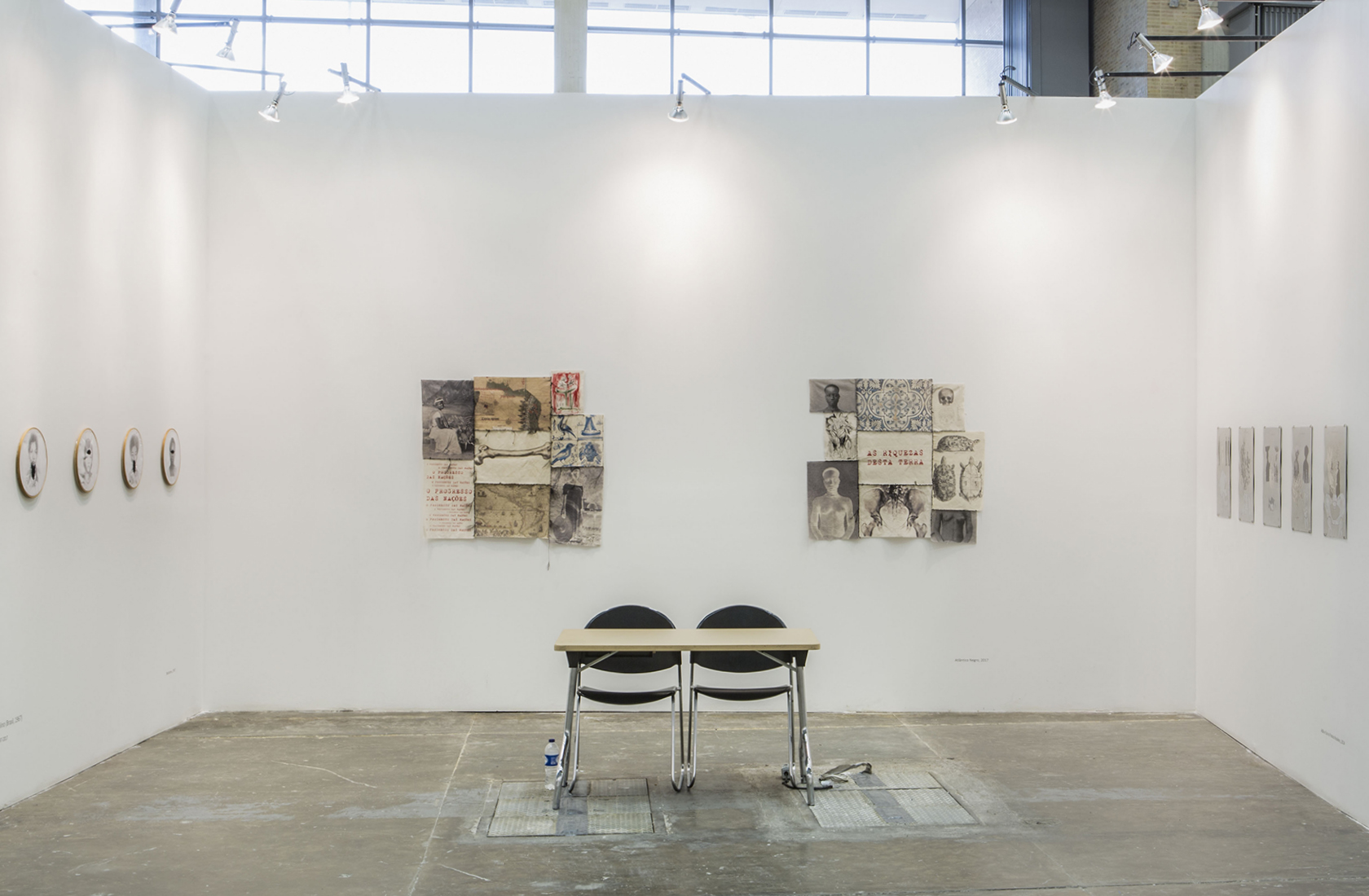 In the Proyectos section of Artbo 2017, Galeria Superfície shows the work of the Brazilian artist Rosana Paulino (São Paulo, 1967). Paulino, who is also an educator and researcher, has racial and gender issues as the focus of her intense artistic and academic research. Her poetics is materialized through an immense range of supports, from the engraving to the installation. Shedding light on the shadows that still linger in a country that has enslaved its black population for more than three centuries, Rosana brings evidences of all the remnants that make Brazil a nation whose more than half of its population declares itself to be black, but that only a little more than 17% of this group were among the richest in the year of 2015. In addition to racial issues, the artist highlights another relevant point: gender inequality, that is, the inheritance of the patriarchal and sexist relations that make Brazil the fifth nation in number of feminicides. And it is precisely from these tacks between social and racial relations today, yesterday and tomorrow, that Paulino stands out as one of the most important female voices in contemporary Brazilian artistic production, with works integrating important exhibitions and collections of cultural institutions in Brazil and around the globe. 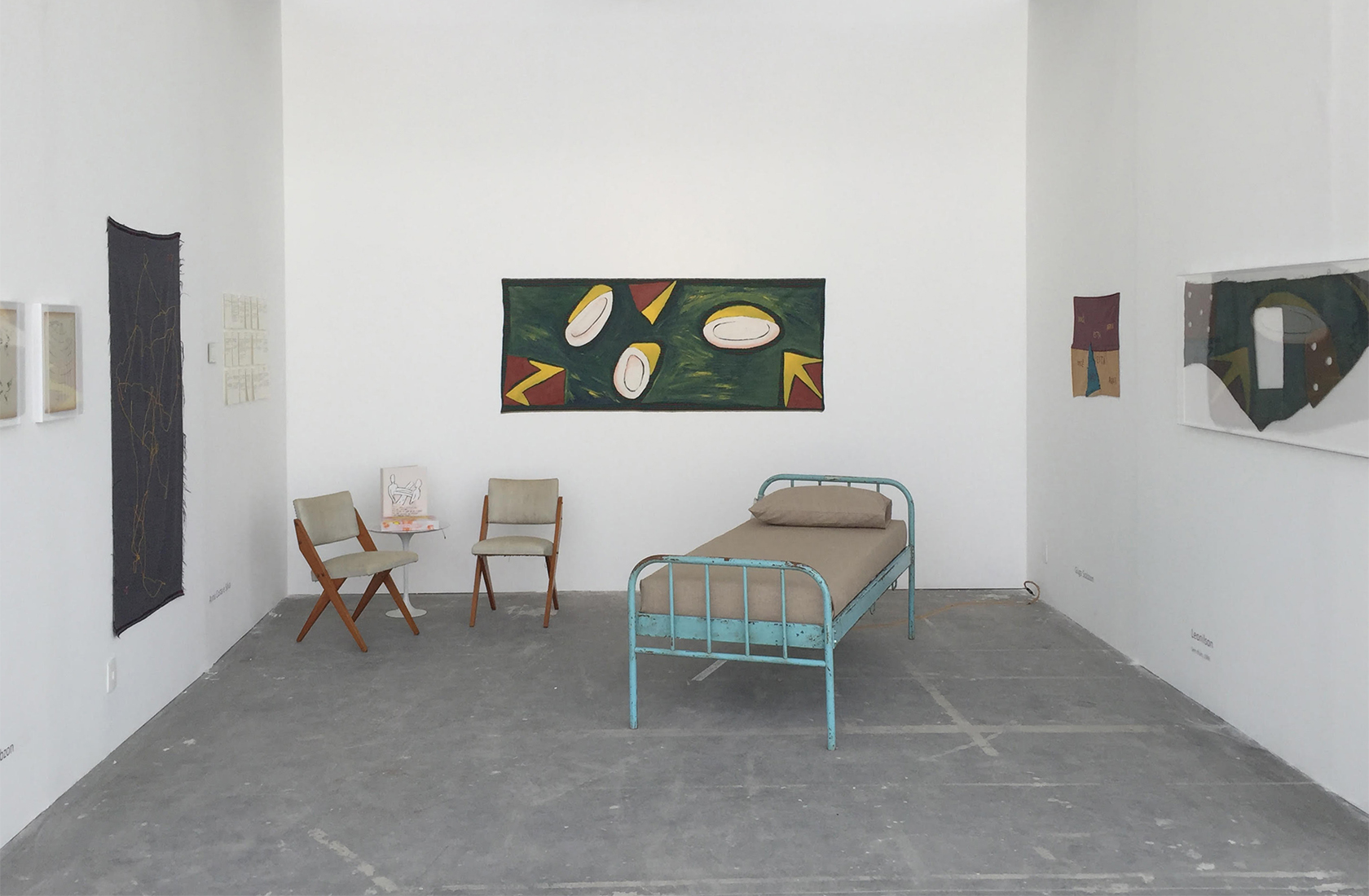 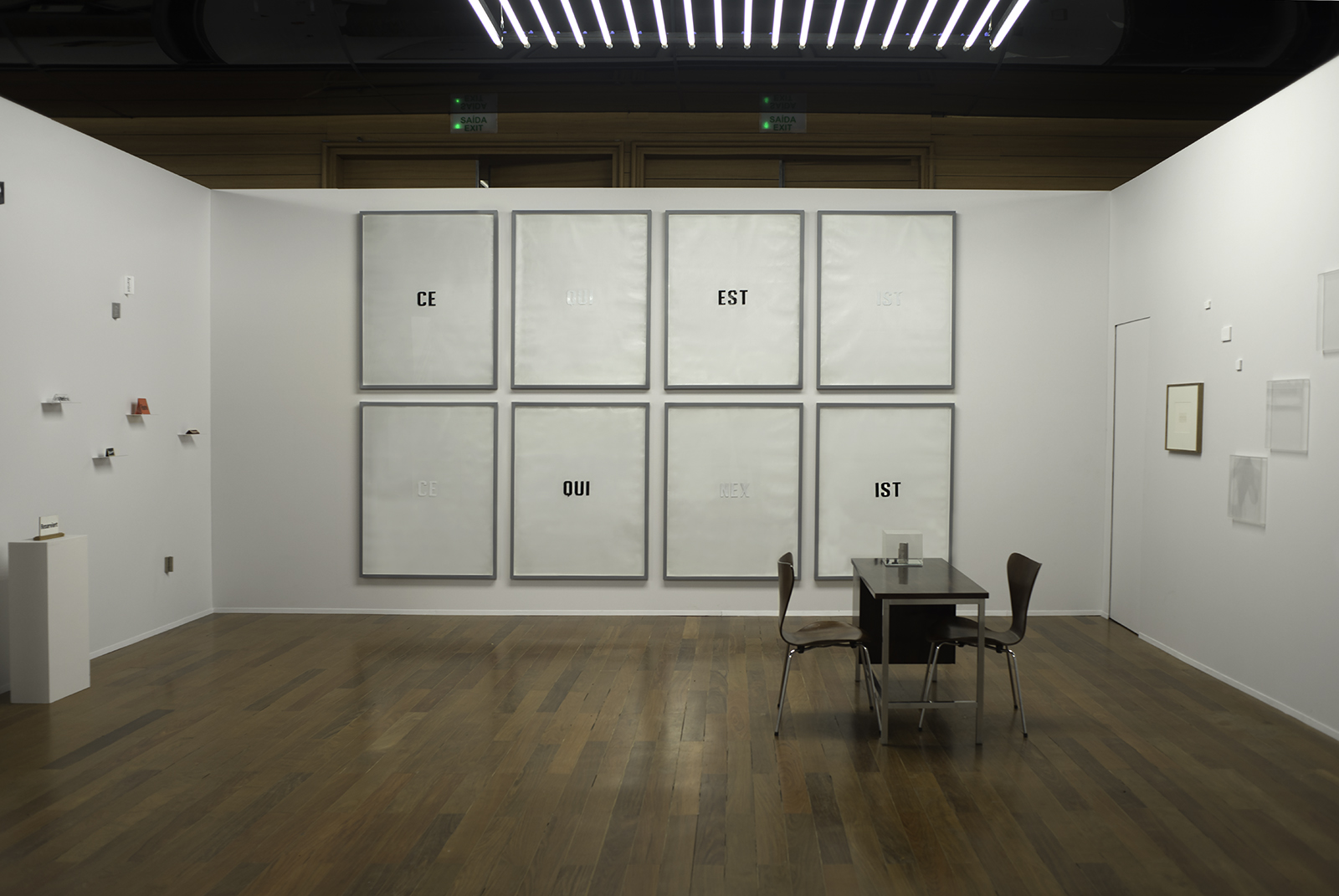 On the occasion of the Semana da Arte, Galeria Superfície is pleased to present a solo project by artist Betty Leirner, which comprises a body of works produced between the 80s and 90s. The selection is centered on a series of “Réservées (objets retrouvées)”, which hypothetically appropriate space, place and fractions in time. From the heart of the artist’s seminal research into transparent materials, and alongside the large-scale eightfold visual poem “CE QUI EST IST” from 1987, Betty Leirner’s choice reveals both the objective and the philosophical challenges of representing invisible matter of mind.

Betty Leirner (São Paulo, 1959) is graduated in Cinema at ECA/USP. The artist held her first solo exhibition, the minimalist “Squares of Light”, at MASP in 1978. Awarded a three-year postgraduate grant from the Konrad Adenauer Foundation, Germany, she moves to Europe for the second time in 1991 , where she develops the relations between writing, image and support and her researches related to dematerialization. She settled in Hamburg, Germany, until 2002 and then set up the studio “Landscape” in the city of Basel, Switzerland. She interconnects sound, visual and linguistic processes in her films, rediscovered objects and scattered texts, updating poetry as the core of the arts. 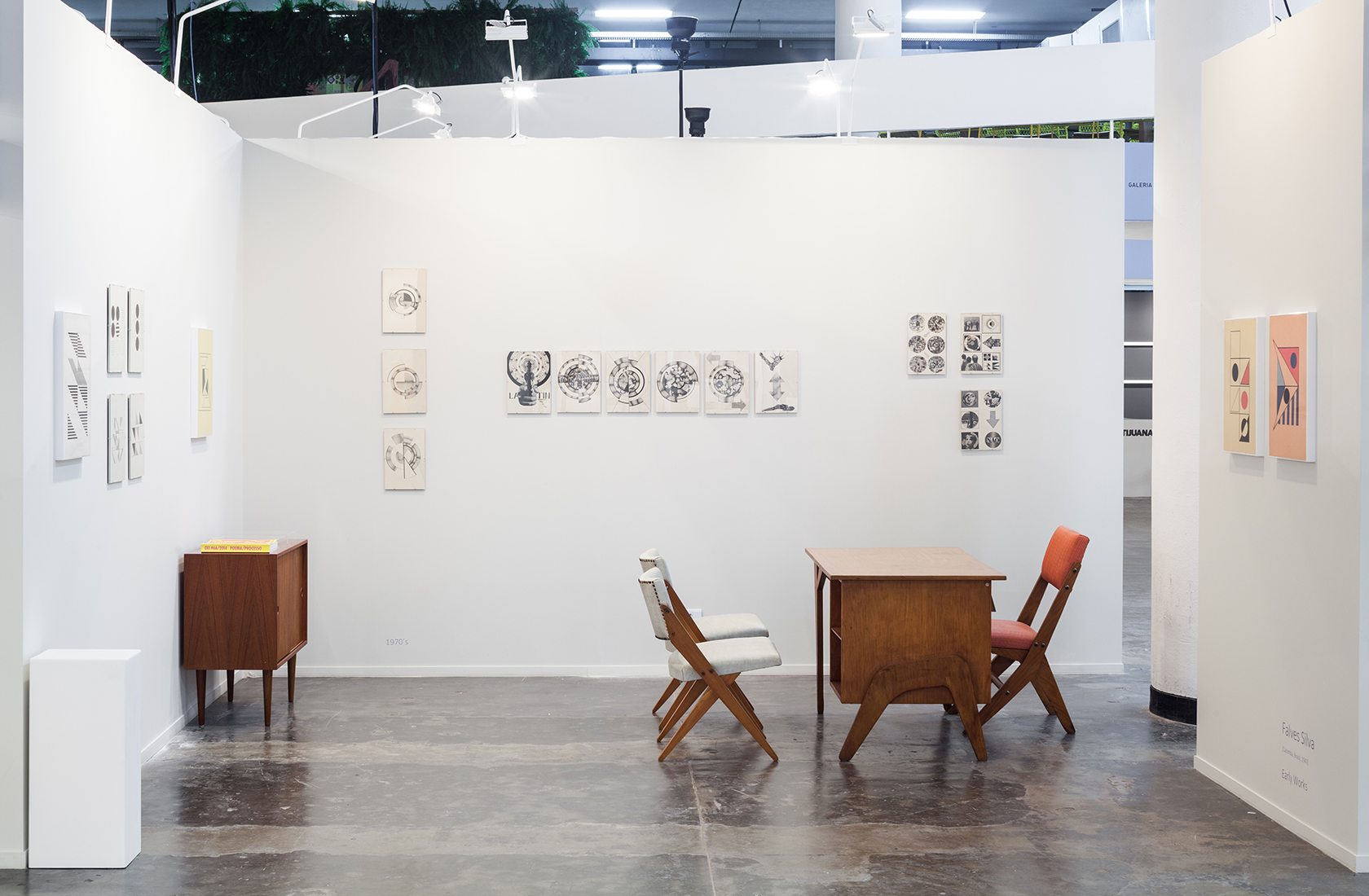 For the Solo project, Galeria Superfície presents a variety of works, geometric collages, drawings and books. The works date from 1967, the initial year of the Poema/Processo movement, to the series “Sinais”, from his recent production, from 2006–2007, in which the artist shows us “signs of a futuristic writing, in which the alphabet of writing linear gives way to new signs, to a new non-verbal and exclusively semiotic proposal.”

Falves Silva (Cacimba, Brazil, 1943) is one of the pioneering artists of the Poema/Processo movement, alongside names such as Moacyr Cirne, Wlademir Dias Pino, Álvaro de Sá and Neide Sá, and was one of the main names to make visual and experimental in Brazil. Falves Silva’s production is based on the convergence of two of the main axes of Brazilian art: concrete movement and conceptual art. The artist dialogues with literature, cinema and comic books; he manipulates communicative structures and images from art history and mass communication. In 1967, he participated in the inaugural exhibition-manifesto of the Poema/Processo movement, as well as in the XVI Bienal de São Paulo, which was curated by Walter Zanini. From the 1980s onwards, he joined the international postal art network, and maintained an intense and fruitful dialogue with artists of different generations and nationalities, such as Jota Medeiros, Ivald Granato, Paulo Bruscky, Hudinilson Jr, Horácio Zabala , between others. His works were exhibited at the International Mail Art Exhibition, Tokyo, Japan, in 1984, and at the 2nd Bienal de Arte Correio, Spain, in 1999. More recently, the artist had his solo exhibition “Círculo do Tempo”, a retrospective of his career, presented at the Centro Cultural São Paulo. 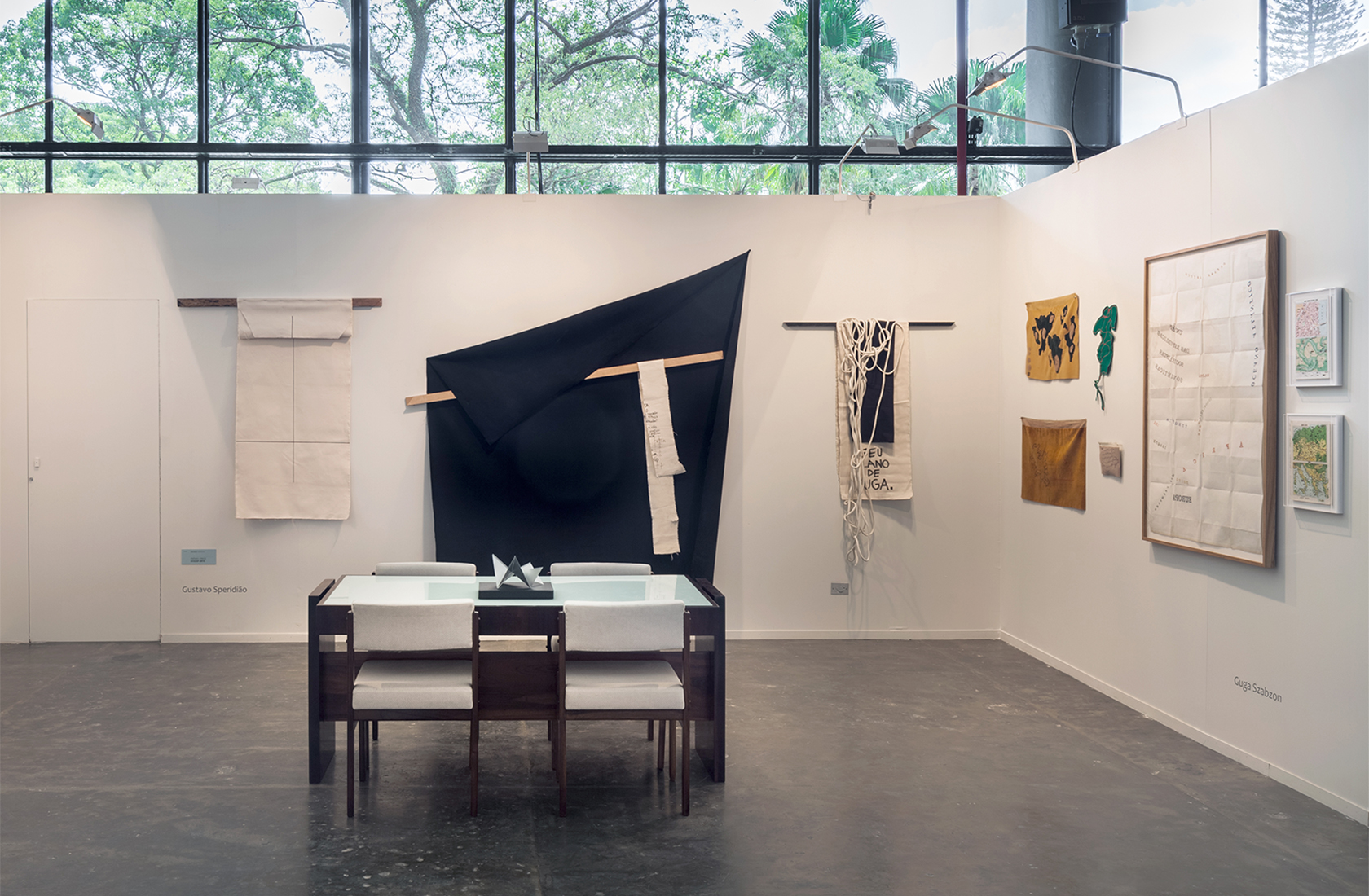 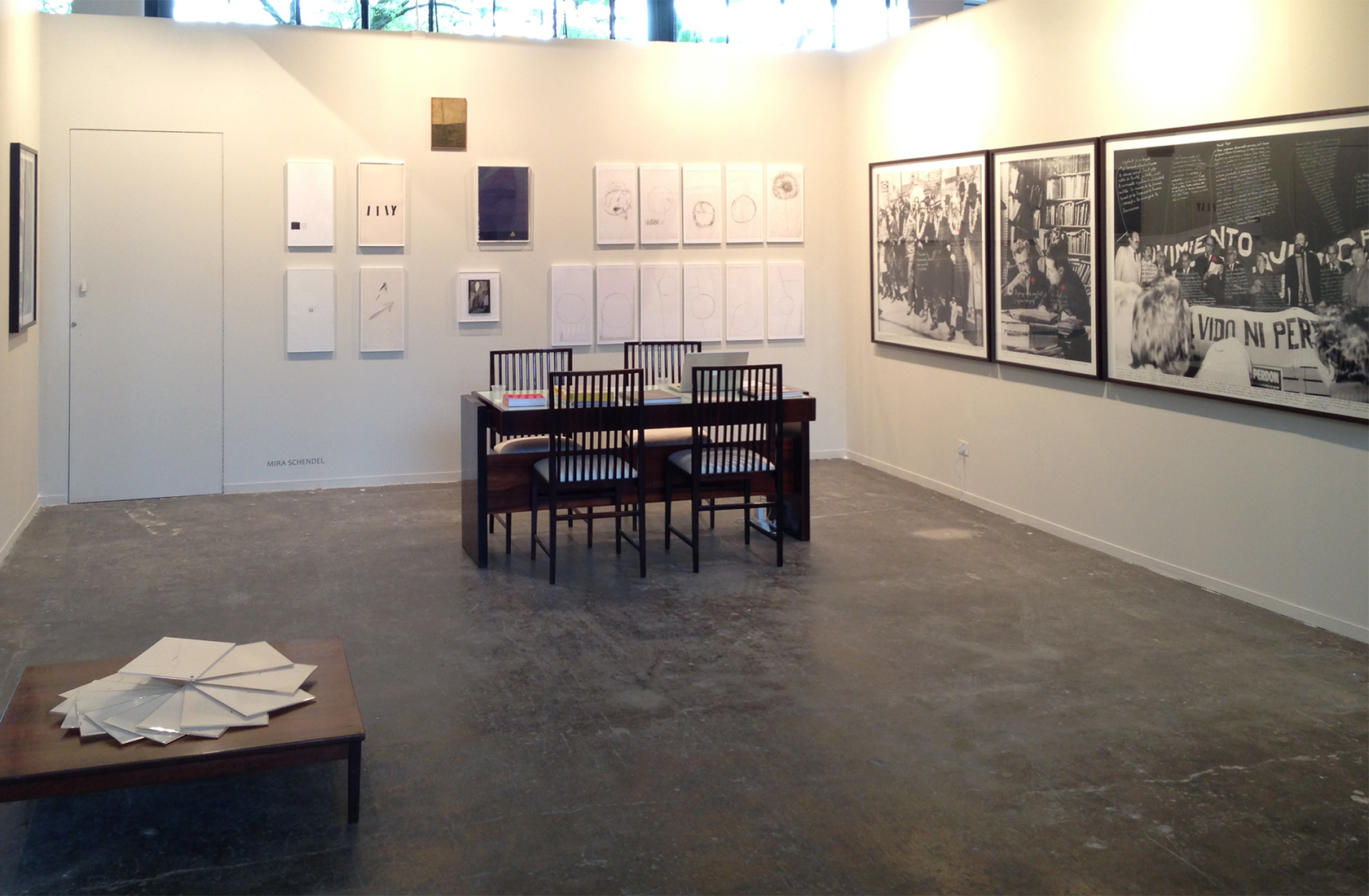